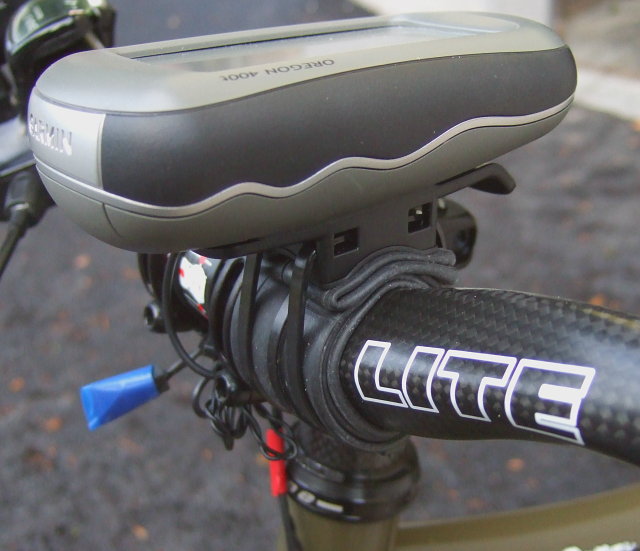 
Within the last weeks I have been gathering some practice with my new Garmin GPS, an Oregon 400t model. It was attached to my MTB, the Big Dummy, a motorcycle and a scooter. Finally I installed two bicycle holders, one at the Big Dummy and one at the scooter. I will need to buy at least two more of them. The Garmin bicycle holder for Oregon and Colorado models is simple and cheap, but it is not ready for hard bumps and impacts, probably dropping the device incidentially. Thus I had to feed in some layers of soft rubber tubing to prevent heavy shattering of device. While this was possible in an easy and efficient way at the scooter due to its thin handle bar stay providing space for a thick rubber layer, at the Big Dummy I had to keep my anti vibration layer quite thin due to thick 31.8mm handlebar. See images to compare both mounts. Nevertheless, I am hoping there is enough rubber to make it absorb hard shaking and keep device in place.
There are several GPS mounting systems available as like Bikertech customized, Ram Mounts, Touratech and probably lots more, most of them fairly well addressing the oscillation issue, but in my opinion they are way too big and heavy for my small vehicles, also quite expensive.

Lengthy trips require some thoughts about GPS power supply. Batteries may be sufficient for one or at most two days of continuous use. Some battery charger will be needed most likely, since the Garmin would never recharge its batteries inside when plugged to some USB power supply.
Trying to avoid another battery charger in my baggage, I connected the Garmin to my hub dynamo via the JaweTec Bikecharger mentioned previously here. Basically this works, but it is far from being a perfect solution:

For the motorcycles there is no problem about power supply since it can simply be wired and plugged to the battery via some modified USB converter taken from my previous navigation device. Thus I can run it without any battery inside which is strongly recommended with offroad usage. For the Big Dummy I am still in search for a better solution. I may probably connect a special battery charger to the JaweTec charger and keep a pair of fresh batteries there, but actually I do not really like this, since it requires taking along too many small devices and batteries. I may probably just get a small and lightweighted charger and recharge batteries every night, leaving the JaweTec charger at home.
Another feasible solution would be the dynohub driven Zzing USB charger providing internal battery buffering (unlike the JaWeTec charger) for devices not being capable of USB charging. This way the Oregon GPS could be used totally without its batteries (keeping it lightweighted with better protection against bumps and vibration). However, the Zzing charger is quite big.
The Australian company Pedalpower+ provides DC hub generators and several more interesting mobile power supplies for bicycle usage.
I finally decided to stick with my reliable JaWeTec charger and put some USB chargeable power buffer, called PowerTank by SwissBatteries in between the charger and the Garmin Oregon. I will give it a try and report about it.
The Jawetec charger unfortunately is no longer available but could be replaced by a B&M E-Werk for instance.

Late update – one more interesting option: the Trail-Tech Voyager Moto-GPS takes any AC or DC input voltage up to 150V. This device could be wired to the dynohub directly. It has got an internal LiIon battery which will be charged from external power supply and lasts up to 10h. This device has also got a magnetic speed sensor, environment temperatur sensor, altimeter and lots of features useful for cycling, and will include all this data in its GPX track exports to the micro SD card. I am using such a device on a motorcycle, so check this blog for more details about it (German language).