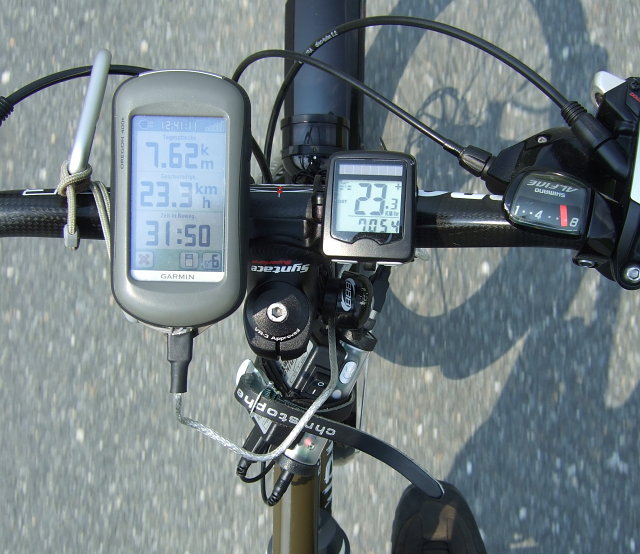 Today was my first test ride for the new power supply device chain: new dynohub SON 20R, JaWeTec Bikecharger, SwissBatteries PowerTank M, Garmin Oregon GPS without internal batteries, Schmidt Edelux lights playing all together. I did some short slope of probably 45km with some 1300m of elevation. Most of the uphills were too slow to keep the bikecharger charging the Powertanks internal battery, so I switched it off at uphills and let the Powertank drive the GPS on its own. At first image those two Powertank LEDs are visible. A red one indicating charging state and a blue one indicating some device at USB out consuming power.

With such short ride I could not enforce any power outage and I could not determine whether the GPS would empty the Powertank quicker than it could be recharged by the bikecharger. No problems today. The Garmin GPS ran continuously without internal batteries, performing routing, showing maps, trip computer and several other jobs permanently. No power saving mode, but no backlight, though.

Charging of the Powertank starts at less than 10km/h with the SON 20R dynohub. As soon as speed goes further down, one should consider switching off the bikecharger to protect the Powertank from those remaining slow pulses at DC out of the bikecharger no longer being able to provide constant voltage from dynohub out.

There is one more interesting experience: with the SON 20R there is no need to switch on the lights when reaching speed of 50km/h to protect the bikecharger from dynohub overvoltage. Actually the charger would switch off itself automatically for that reason. I had to take care about this when using the stronger SON 28S dynohub.
On the other hand, I found out, as soon as switching on the lights, there is not enough power to charge the powertank, no matter how fast I am riding. With my previous installation it looked as like there was enough power left to charge the GPS even when lights would shine, but there definitely is not. The Powertanks red LED will not even flash slowly with lights switched on. So that was not a very good idea, anyway. Something that I will no longer pay any attention to.

Finally some words on installation and weight: the whole collection of USB devices and cables including GPS but without dynohub and lights makes up 342g. See third image. Installation looks some kind of messy at the moment, but everything will be protected by some small bag mounted at top tube. At final stage there will by two wires from the top tube bag to handlebar and the GPS at the handlebar. Should look quite clean. Need to get appropriate bag.