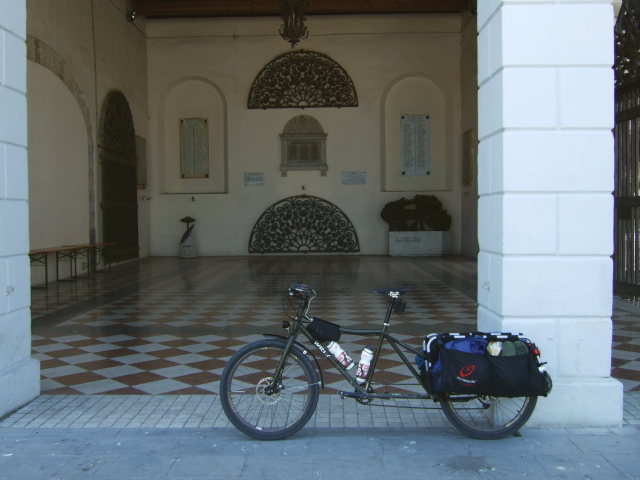 Due to lack of fitness I had to cancel our plans for doing the Route des Grandes Alpes on the Big Dummy this year. Instead, we did a relaxed 6 day slope from Austria to northern Italy, visiting the Adriatic sea and back via Slovenia.

Day 1 (Villach – Osoppo)
It started out with some short 25km from home to the train station at horrific weather. Riding exposed to a heavy thunderstorm, fighting strong head wind and massive rain was kind of bad start. However, when reaching Villach by train through continuous extraordinary rain, it started to light up slowly. After a while the rain stopped and we rode to Tarvisio at dry conditions. It even became sunny that day and we were happy when arriving at our hotel in Osoppo.

Day 2 (Osoppo – Caorle)
A sunny and relaxed ride along the Tagliamento river passing several sleepy little towns with nice bars. We found some Bed&Breakfast accomodation where we slept in a rolling home. In the evening we took a bath in the Adriatic sea at Caorle beach and had our dinner in a good fish restaurant in the beautiful center of Caorle.

Day 3 (Caorle – Grado)
Going along the Caorle Laguna via San Gaetano and finding some route nearmost to the sea, we passed by Aquileia and stayed at some Hotel at Grado.

Day 4 (Grado – San Pietro al Natisone)
After leaving Grado, we visited the archaeological excavations of Aquileia and spent some time there. Then we went to Palmanova and Cividale, two awesome cities. In Cividale we took a bath in the river Natisone. Along the beautiful Natisone we rode on direction Pulfero and Slovenia and stopped at San Pietro al Natisone. At dinner, we had a special dessert: Gubana, some dry cake fully soaked with Grappa. Cheers. Ouch.

Day 5 (San Pietro al Natisone – Paternion)
From San Pietro we went to Slovenia passing by Kobarid and Bovec, heading towards the Passo Predil. It was steady uphill all the time. From Passo Predil we went down back to Italy and finished at Villach Austria, where we departed. From now on I was on my own and took the Drautal bikeway to Paternion, where I found a nice and cheap accomodation.

Day 6 (Paternion – Golling)
I wanted to get home in one day. 197km and two hard climbs. First climb, the Katschberg pass, was probably the hardest uphill ever with my Big Dummy. Continuous slope of up to 21% for probably 500m of elevation with my 8 speed internal hub and all the baggage was a killer. With some intentional photo and water breaks I did it, but I was exhausted. Next uphill to Obertauern was relaxed, compared to the former one. From Obertauern I went down to Radstadt and rode on direction Salzburg. After 157km and probably 2000m of elevation I decided to take a train and a bus for the final 40km, since the extreme hot weather all over sudden changed into nasty headwind and heavy thunderstorms.

Conclusion
After all, the Big Dummy and the Alfine drive train once more proved reliable for touring. No problems at all. Also, I was very pleased with the Snafu Knob Job tires that worked well for both paved and gravel roads. The mobile power plant as mentioned in previous articles worked flawlessly. The dynohub power supply kept my GPS operational all 6 days without any outage and without use of internal batteries. Even at slow uphill passages without sufficient dynohub feed the Powertank was durable enough to last on.